Numbers don't lie.  This was by far my slowest marathon and the toughest one I can remember.  I ran a trail marathon in Wyoming in 2001 that was pretty hard, too, but I think this past weekend was harder.  I have only run a few trail races and most of them have been pretty easy courses, relatively.  I saw that this small trail run in Delaware would fit nicely into my 2014 schedule, so I signed up months and months in advance.  I did so with warning, as the website warns 50 staters like myself:

"Note to 50-Staters: This is the hard way to earn your Delaware marathon finish! Expect ruined shoes and a possibility of not finishing.  If you do finish, it will likely be your slowest ever finish time."

Undeterred by the warning, I signed up.  In my training, I never included any trail runs.  BIG MISTAKE.  Flat, fast, easy "trails" like the Mopac don't count, I guess!

Getting there was easy.  Newark, pronounced "New-Ark", is a short drive from Philadelphia.  There was no expo and no packet pick up the night before.  Just show up at the state park before the start, get your number and shirt, and start running.

There was a lot of rain the night before the race, but race day was absolutely perfect.  The course was a little muddy from the night before, but not terrible.  The course was mostly single track trail, with some rugged terrain, but manageable.  Lots of tree trunks and roots to hurdle.  The high light of the course if you want to call it that, was a knee-high creek that runners had to wade across.  It was probably twenty yards across, and the water was very cold.  The marathon crossed the creek at various spots FOUR times!  The first time I put on knee high water proof boot covers to try to keep my shoes and socks from becoming totally drenched, but they didn't work that well and I had to carry them 2 or 3 miles after the crossing to find a place to properly dispose of them.  It wasn't worth the hassle, so I crossed the remaining 3 times without cover.  Coming out of the creek, my trail running shoes and socks were completely soaked, of course, and covered with mud.  It was a neat experience, though.

I finished the first half in 2:45, which, given the course conditions, wasn't too bad.  As I started the second half though, I could tell it was going to get much tougher.  The constant up and down running had really taken a toll, and my legs at 13.1 felt like they usually do at 20 miles.  My pace slowed considerably the 2nd half.  I was passed by more experienced trail runners, who were quick with words of encouragement.  Another thing that kept me going was the encouragement from the runners competing in the other events.  They knew how tough the marathon was, and their cheers and acknowledgments helped.

I never considered dropping out of the race.  Even if I wanted to, I don't know how I could have.  Once you were out in the trails, you had the get back somehow.  There wasn't much support out there.  I suppose if somebody was really hurt, they could have called for help and gotten an injured runner out safely.

It helped knowing that there was no cut off time for the race.  After four hours, the aid stations were self service, which was fine by me.  I just had to keep going.  Relentless forward progress.

As I neared the finish, there was a group of teens in the park playing volleyball who stopped and stood and cheered as I crossed the finish.  I was one of the last runners, but not THE last, to finish.  I was exhausted mentally and physically.  I was handed a tiny finishers medal and commemorative coffee mug.

I wasn't sure how I was going to get cleaned up after this.  I had already checked out of my hotel and had a flight to catch in Philly.  Fortunately, the park had a public bathroom with running water and a soap dispenser.  I had an extra pair of clean socks that I used as a wash cloth and a pair of dry shorts that I used as a towel.  I washed off most of the mud and blood from my legs, and drove to the airport, exhausted but proud, with #47 in the books.

Posted by Scott Swanson, M.D. at 5:47 AM No comments: Links to this post

A Picture is Worth a Thousand Words

I downloaded my Garmin this morning, and was curious to see what the course looked like objectively.  Here is the % grade of the course plotted against my time.  You can see there were alternating climbs and descents with very few (if any) flat parts.  There were several 20% climbs and a few downhills >25% (not easy on the quads!)

Posted by Scott Swanson, M.D. at 9:16 AM No comments: Links to this post

Finished my Delaware marathon today, completing a trail marathon in Newark, DE. It was by far the most difficult race I've run so far, taking me nearly 7 hours to complete. Full report to come.
Posted by Scott Swanson, M.D. at 3:45 PM No comments: Links to this post

Looks like a muddy trail marathon tomorrow in Newark, Deleware. 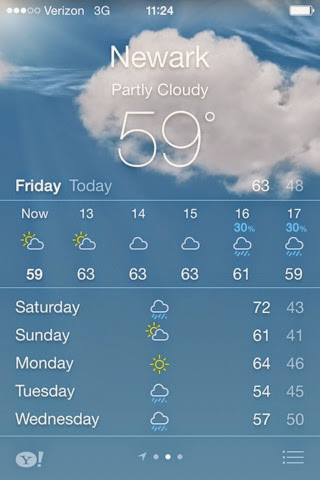 My 2014 marathon season kicks off in under two weeks, with a trail race in Newark, Delaware.

The race director sent out this picture to participants.  Guess I'll need to bring some dry shoes and socks! Posted by Scott Swanson, M.D. at 7:01 AM No comments: Links to this post

Too Much of a Good Thing

In this blog I espouse the benefits of an active lifestyle, and of running in particular.  As I near 50 marathons in less than 20 years, I suppose that is "extreme" by most normal standards.

The benefits of moderate exercise are widely accepted.  The effects of extreme exercise are more controversial.  Most ultra-endurance athletes look like they are in great shape, and in fact, most probably are.  There is a sobering body of scientific work emerging, however, which cautions that extreme exercise may not be beneficial and may actually be harmful.

The definition of extreme exercise is elusive, but in this example the authors studied a group of athletes who had run at least one full marathon each year for 25 years.  Although many of their physiologic parameters were good, in many respects their risk of cardiovascular events was no different than their sedentary counterparts.

As with most things, moderation is probably best.

http://journalstar.com/lifestyles/health-med-fit/walk-away-from-excess-running-researchers-say/article_a846f9cd-2684-50b1-b217-2d7d71d01ffd.html
Posted by Scott Swanson, M.D. at 6:29 AM No comments: Links to this post