We have been seeing extreme temperatures lately with heat index topping 100.  The heat does not mean you have to stop running.  I actually really enjoy running in the heat and working up a good sweat because, to paraphrase Dr. George Sheehan, "sweat cleanses places a shower can never reach."

One must be smart about summer running, however.  I've posted links to a Mayo Clinic article on heat stroke, and some helpful tips from Jeff Galloway of Runner's World related to summer running.

Posted by Scott Swanson, M.D. at 6:12 AM No comments: Links to this post

I just returned from a weeklong orthopaedic foot and ankle surgery meeting in San Diego, CA.  The weather was fantastic, as always, and I was able to run every day I was there.  I've taken some time off to recover from the spring marathon season, but now must start to train for a late summer 1/2 marathon and the fall marathon season.  While in San Diego I ran 3, 4.5, 6, 9, and 12 miles on consecutive days.

It brought back some fond memories of my third marathon (and still second fastest), the San Diego Rock 'n' Roll Marathon.

After the Dallas White Rock Marathon, I just wasn't sure that my knees would hold up for another marathon.  I took several weeks off to rest.  I worked on some strength training (an area most runners, myself included, neglect) and did some biking.  My passion was now running, however, and I couldn't wait to get back on the roads.  I competed in more weekend road races, and even managed to place in my division a few times, winning a watch in the Mike Doucy Stars of Texas 10K.  It remains one of my proudest possessions!

I wasn't doing any speed work per se, but the road races were even better.  I was in "marathon shape," already, and just kept getting faster.  A friend of mine in Dallas mentioned that he was going to be running the San Diego Rock 'n' Roll Marathon in June.  The RnR series were relatively new at the time, and the idea of being supported by 30 some bands on the course was appealing in the days before iPods were common or even allowed at races.  I had an old college friend in SD whom I had not seen in a long time.  I'd never been there, so it seemed like a great excuse to go.

The trip was great.  I went to the Zoo and Sea World, and my friend took me sailing the day before the race.  Race day was hot for San Diego, and the course was hilly in places.  There were nowhere near 30 bands as advertised, but the entertainment was fun.  I ran a very strong race from beginning to end, running the second half faster than the first.  Training all year in the Texas heat and running all of those road races had really paid dividends.  I felt like I had plenty of gas left in the tank at the end of the race.  Also, I had no pain anywhere in my body!  I looked down at my watch--3 hrs, 27 minutes, 55 seconds.  In just my 3rd marathon, I had cut nearly an hour off of my debut time.  I was starting to feel like a real marathoner!

I celebrated that afternoon by eating fish tacos on Pacific Beach (PB for those who live there).  I had always heard people talking about qualifying for the Boston Marathon.  I began to wonder, what would that take?
Posted by Scott Swanson, M.D. at 6:12 AM No comments: Links to this post

Great News!  I just found out that I received a sponsor's invitation to run in the 2012 ING New York City Marathon. 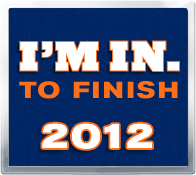 Posted by Scott Swanson, M.D. at 2:18 PM No comments: Links to this post

I pretty much took last week off to recover from the Bayshore Marathon.  It was my fourth marathon in as many months and my legs needed a break.  I'm taking the summer off from marathons and will focus on strength training, flexibility, speed, and weight loss.  I'll once again be doing boot camps at Good Life Fitness.  The results, I hope, will fuel the fall marathons.  I am signed up for four marathons in the fall, including my first "double" with a Saturday marathon in Hartford, CT and a Sunday marathon in Newport, RI
Posted by Scott Swanson, M.D. at 7:04 AM No comments: Links to this post