Who would you invite on a long run?

I have ONE spot left to give away to the Harvest Moon Hustle on September 16.  To be entered for a chance to win the last free entry into this sold-out race, just respond to this week's reader's question.

This week's question is, "if you could go on a long run with any person in the world, alive or dead, who would it be, and why?"

Post your answer on this blog or the Nebraska Orthopaedic & Sports Medicine Facebook page.
Posted by Scott Swanson, M.D. at 11:39 AM No comments: Links to this post

One of my favorite things to do to make the miles go by quickly on a long run is to listen to a podcast or audiobook.  Not surprisingly, I very often find myself drawn to books about running.  Here are some of my favorites that I have read or listened to over the years.  What are your favorites?  Comment below or on our Facebook page for a chance to win another entry into the sold out Harvest Moon Hustle.

Born to Run- Christopher McDougall's modern running "classic."  This book spawned the barefoot running craze, but it was so much more.

Staying the Course: A Runner's Toughest Race- Dick Beardsley's memoir.  He was one of America's top marathoners in the 1980s.  Includes his account of his famous race against Alberto Salazar in the 1982 Boston Marathon.

The Perfect Mile: Three Athletes, One Goal, and Less Than Four Minutes to Achieve It- Everyone knows Roger Bannister broke the 4 minute mile barrier.  In this book, Neal Bascombe tells his story and that of two other, lesser known runners, who competed to be the first to break this milestone.

The Long Run- A great short story by Mishka Shubally about running away from personal demons and finding redemption.

My Life on the Run- A memoir by Bart Yasso of Runner's World fame.

The Courage to Start- By John Bingham, aka "The Penguin."  A great book about the transformative power of running for the every-man.

This weekend I logged a lot of miles pushing my 3 year old daughter in a Baby Jogger.  It has been said that "hills are speed work in disguise."  I would add that pushing a Baby Jogger is also a pretty good workout for building speed and strength, and about the only "speed work out" I do anymore.

In the archives of this blog, July 2011, you can read several posts about my favorite speed workouts, including tempo runs and Yasso 800s.

For a chance to win a coveted entry into next month's Harvest Moon Hustle, tell me about your favorite speed work out!

Posted by Scott Swanson, M.D. at 6:53 AM No comments: Links to this post

This weekend I completed my first "ultra-marathon."  I ran a 50K in Kenosha, Wisconsin on Saturday, the Hot Hilly Hairy Ultra Solo & Relay.  It was a great ultra for a first timer.  The 50K was one of many races that day.  There were solo races ranging from 10K-85K and many teams competed in a 100 mile relay.  It was a fun, festive atmosphere.

The course was run on a cross country course at the University of Wisconsin Parkside.  The course was a fairly easy 5K, with 50K runners finishing 10 laps.  Temperatures were thankfully mild in the mid 70s.  There were two aid stations on the course, and a place where runners could place their own gear and aid.  It was a perfect set up for a solo ultra. I did not have to carry any aid.  I could drink at the aid stations and after each lap I snacked on my own food (bagel w/ peanut butter, bananas, and oranges).

I liked the set up.  I especially liked that the distance was broken down into manageable segments.  Rather that saying to myself, "I have to run 50 kilometers this morning" I only had to run 10 laps!  This kind of mental trick can be very helpful.

I had no goal time.  My only goals were to make it back to Milwaukee in time to catch my flight home, and to finish.  In the end, my finishing time was 6 hours, 36 minutes, and 15 seconds.  My finishing time put me in the top 1/2 of 50K solo runners.  It would have been faster but halfway through I had to go move my rental car so it wouldn't get towed away!  In the dark pre-race hours, I guess I parked illegally!

Competitors in the ultra distance received a hand made crown and a shirt that said, "I slayed the dragon."  The event had kind of a medieval theme.  All in all, it was fun experience.  50K is the longest I have ever run.  Next up is a 50 mile trail run in September. 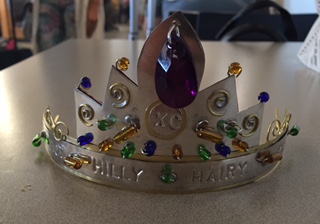 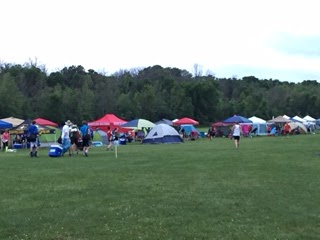 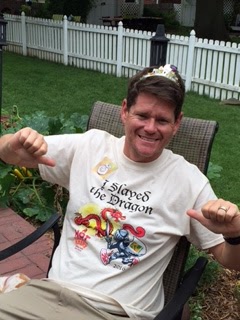 Posted by Scott Swanson, M.D. at 7:07 AM No comments: Links to this post