Little Run on the Prairie

I am proud to announce that I will be sponsoring the 2nd Annual "Little Run on the Prairie," a 1 mile kids fun run on Saturday, October 3.  The race begins at 10:30AM and is held at Prairie Hill Learning Center, just off of HW 77 near Roca.  Registration is just $10 and includes a t-shirt.  After that, stay for the Children's Country Fair, where there will be lots of food, games, and fun. 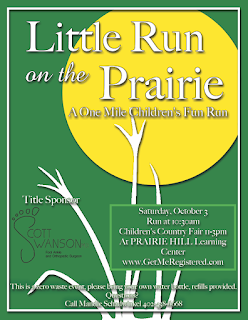 I have lived in Lincoln since 2008.  Prior to that, I lived in Omaha for 15 years.  To be honest, there are many things I still miss about Omaha.  However, when it comes to running, Lincoln has Omaha beat, and it's not even close.

The trail system in Lincoln is one of the finest I have seen anywhere and it is even plowed in the winter!  In Omaha, I could never run on the major trail, the Keystone Trail, until it thawed in the spring.  I distinctly remember one long winter run in Omaha when, after just a few miles running in the snow, my toes began to go numb.  I thought to myself that there was at least a chance that I might need my toes amputated after I finished my 16 miler!  No such problems in the Capitol City.

We also have three great specialty shoe stores: The Lincoln Running Company, Red Dirt, and Footloose & Fancy.  I've bought shoes and gear at each.  No matter where you go, you'll find friendly and knowledgeable staff.

Finally, we have a great lineup of local races put on by the Lincoln Track Club and BRIN (your's truly is a proud sponsor!).  The highlight of the year is, of course, the Lincoln Marathon and 1/2 Marathon.  This is a very popular, well organized, well executed, and highly acclaimed race embraced by the entire city.  Omaha just can't seem to get it's race right.  Organizers are being forced to change the course because it wasn't approved in time.  This is just the latest in a long line of stumbles and missteps that have plagued Omaha's distance events over the years.  Meanwhile, Lincoln just gets better and better.

http://www.livewellnebraska.com/fitness/after-heartland-marathon-organizers-scramble-to-adjust-sunday-s-race/article_f64421cc-dec0-51db-b434-dd2d4f2d3b62.html
Posted by Scott Swanson, M.D. at 9:49 PM No comments: Links to this post