As the Marine Corp Marathon registration sell out showed, marathon participation continues to explode.  The growth of the Lincoln Marathon has been slowed by the "bottle-neck" that runners experience on the trail next to highway 2.  With renovation of the trail set to go forward, organizers expect the race to expand soon.

http://journalstar.com/news/local/govt-and-politics/funds-to-help-expand-trail-push-marathon-past-runners/article_c8f0b6d5-f394-5acf-a60e-cd010eec760c.html
Posted by Scott Swanson, M.D. at 6:17 AM No comments: Links to this post

It is really a shame that the registration fiasco has put a stain on the Marine Corp Marathon for 2013.  The marathon known as "The People's Marathon" has a well deserved reputation for putting on a first class, mega-marathon, with military precision.  No surprise there!

I am very much looking forward to this race in the fall.  By then, I think most people will have forgotten about glitches on Wednesday.

Here is a link to the motivation video from the race website:
http://www.marinemarathon.com/Community/MCM_TV.htm
Posted by Scott Swanson, M.D. at 6:23 AM No comments: Links to this post

I was able to successfully register for the Marine Corp Marathon in Washington, DC this fall.

Online registration was a disaster!  I was lucky enough to get in pretty quickly.  The race sold out in less than 2.5 hrs.

I expect this marathon will be a lottery from now on.  Runners who didn't get in are still able to race with one of the many charity partners.

marinemarathon.com
Posted by Scott Swanson, M.D. at 2:39 PM No comments: Links to this post 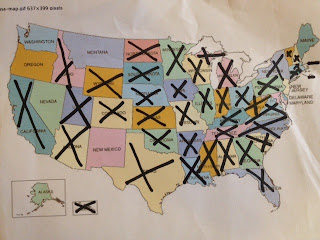 Posted by Scott Swanson, M.D. at 9:02 AM No comments: Links to this post

I've only done one trail marathon before.  That was a race outside Laramie, Wyoming.  That race was really hard and I've avoided trail races ever since.  I only signed up for this one in Virginia because I was going to be able to make a double weekend out of it.

I didn't do a lot of research about the race.  When I did, I found this elevation map.  Although altitude wouldn't be an issue, the dozens and dozens of climbs might be.

I was pretty nervous going into this.  The weather forecast didn't help.  It was supposed to rain the night before the race and all day Saturday.  When I woke up Saturday I looked outside and it was still dry.  I put on my trail shoes and headed to the race.  A few minutes before the start, it began to rain.  There were maybe 100 runners at the start, and nobody was fazed by it.  The race started at 7:45, and we all dashed into the trails of Pochohontas State Park.

As far as trail races go, this was pretty easy, I think.  There were some creeks to cross, tree roots to hurdle, and rocks to avoid, but it wasn't too bad.  As the map shows, there were tons of hills.  You were either running up one or down one.  There were very few straight, flat stretches.

The race ended up being a lot of fun.  The trail was pretty sandy, so it absorbed a lot of the rain.  There was certainly some muddy areas, but nothing like I had feared.  After 30 or 40 minutes the rain stopped, and by the end of the race the sun actually came out.  It never got too hot.  The scenery was great and the course was challenging, but not terrible.  There were no spectators, basically, only volunteers every 3 miles or so at the aid stations.  These were stocked with skittles, M&Ms, pretzels, water, and gatorade.  I walked up the steepest hills in order to try and conserve energy for the marathon in North Carolina the following day.  I finished at 5:07:53.  I grabbed some water and gatorade, fruit, and a burger.  I walked to my car and changed into some dry clothes and hit the road.

This was a no-frills race in just it's second year of existence.  Packet pick up was at the local running store, with no expo.  There were no timing chips.  There was no music or spectators on the course.  Volunteers grilled burgers and brats at the finish for runners.  As somebody who has up until now preferred large urban marathons (NYC is still my favorite), this small, low-key trail marathon in Virginia was a real treat.  When the race organizers decided to call it the "Instant Classic," I think they were on to something.
Posted by Scott Swanson, M.D. at 5:42 AM No comments: Links to this post

This was the second part of my "Atlantic Coast Double."  After a tough trail race yesterday, I had my doubts going into this one.

The race was in Cary, North Carolina, which is a town right next to Durham.  I made it in time for packet pick up.  The expo was small and efficient.  The race director was walking around talking to runners and answering questions.  A very nice touch.  The Embassy Suites was the host hotel, and they had a pasta buffet the night before the race.  It didn't cost much more than most pre-race pasta dinners I've had, and it was very good.

Transportation was kind of a pain.  The start and finish was at the USA baseball complex, 10 miles from the host hotel, which is strange.  Parking at the baseball fields was limited, and you had to pre-register for a parking pass, a detail that I neglected.  If you didn't have a parking pass, you were forced to drive 6 miles or so to an off site parking area, where busses would drop you off at the start.  Runners were encouraged to get there at 5AM for a 7 AM start.  This seemed excessive, but with memories of my near miss in Arizona last year still pretty fresh in my mind, I was there by 5:15.  We made it to the start a full hour before the start of the race and I did my best to keep warm and occupied.

The race started promptly at 7.  There were a few rolling hills the first 2.5 miles.  From there, the course   turned on to the American Tobacco Trail.  We spent the next 20 miles on this trail.  For Lincoln runners, think of the Mopac trail from 84th St heading east.  The trail was soft, flat, and straight.  Although it was pretty boring, my quads needed a break after the hills yesterday.  Aid stations were frequent and well stocked.  There were lots of porta-potties, too.

I ran the fist half in 2:16 and the last half in 2:25.  Considering the race I ran yesterday, I was pretty happy.  The post race party at the finish seemed like it was going to be fun, but I had to catch the shuttle back to the parking lot, get in my car, drive to the hotel, shower, change and go to the airport.

This was my 8th marathon since Labor Day.  I don't race again until July.  I am looking forward to taking a couple of weeks off!
Posted by Scott Swanson, M.D. at 1:28 PM No comments: Links to this post

I completed the first part of my double weekend today.  I finished the "Instant Classic Marathon" in Chesterfield, VA.  It was a rare trail race for me.  I took these pictures from the course.  Next up, North Carolina! 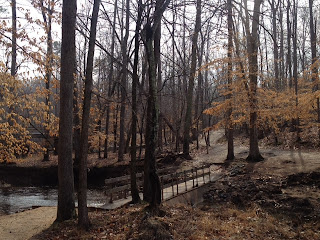 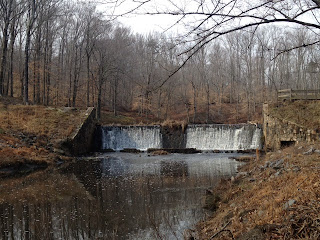 Posted by Scott Swanson, M.D. at 5:10 PM No comments: Links to this post

I think I am ready for my second "Double Marathon Weekend" in the last 6 months.  This weekend I will travel east to run a marathon on Saturday in Virginia and North Carolina on Sunday.

My training has gone well.  Two weeks ago I ran back-to-back 20 milers to get ready for this, and those went well.  The 20 mile run on Sunday was only 1 second per mile slower than Saturday.  My toughest training run was an 8 miler this past Sunday at the peak of our snow storm in Lincoln.  It was basically 8 miles of high knees through drifts as high as a foot, with gusting winds up to 30 mph.  When I reached my four mile turn around point, the shoe prints I had just put down in the snow were already covered up!

I feel like I am in good shape for this challenge.  Boot camps have helped a lot with my strength and ability to recover (Thanks to Steve, at Good Life Fitness!) and I've been able to shed a few pounds, which always helps.

I'll have updates from the road this weekend.