This was the first time I attempted to run marathons close together.  I ran in Tampa 3 weeks prior to this one.  I found that the timing was just about perfect.  I took about a week off after Tampa, and then just settled into my usual taper.

Albany was within driving distance from Tampa, where I was doing my fellowship.  I got off work on Friday and was able to make it in time for packet pick up.  I thought it was kind of funny that a candy bar was the official sponsor.  That's one way to carbo load, I guess.  The marathon was on Saturday.  I was in the best shape I had been in for a while.  I was nursing a calf strain, but nothing too severe.  I put a tight ACE wrap on it and I was good to go.

I was trying for 4 hours on this one.  I started out running a little bit under the pace I needed to maintain. I decided to try an unusual strategy.  Most experts suggest maintaining a steady pace or trying for "negative splits."  I reasoned that if I could run as many miles as possible just under my needed mile split times, that I could hold on at the end.

The strategy worked well.  I probably ran the first 16 or 17 miles an average of 15 seconds or so per mile faster than I needed to.  My pace slowed to goal pace for a few miles and somewhat slower for a few miles after that.  I had built a cushion and was able to coast to a sub 4 hour time.  I was really pleased, because I hadn't run a sub 4 hr marathon since medical school.  I could have probably run a little faster, but the course was pretty hilly.

I was happy with my time.  I went back to the hotel and hopped in an ice bath for 20 minutes.  After a quick shower, I was on the road back to Tampa, with #15 in the books.

Posted by Scott Swanson, M.D. at 6:05 AM No comments: Links to this post

The 2012 Lincoln Track Club race schedule kicks off this weekend with the State Farm Run.  It's the perfect race for those training for the Lincoln full or half to gauge speed and readiness.

I've run the 10 mile race each year I've lived in Lincoln.  This is the first year where runners won't brave freezing temperatures and/or a muddy MoPac trail.

You can still register online.  If you miss the deadline, you may register in person at packet pick-up on Friday.  No race day entries.

See the complete 2012 race schedule here:
http://www.lincolnrun.org/races/schedule
Posted by Scott Swanson, M.D. at 6:06 AM No comments: Links to this post

Gasparilla is Tampa's Mardis Gras.  It is a weeklong party and pirate festival.  There are a series of road races that are part of it, culminating in the marathon.  You can read about Gasparilla here if you wish. http://gasparillapiratefest.com/

I did my fellowship in Tampa, so this race was run in my new home town.  After getting settled into my fellowship, I decided it was time to take advantage of the South Florida winters and train for and run another marathon.

My wife and I ran this one together again.  It was by far her best marathon.  She had trained pretty well and could have run much faster.  I urged her to run ahead of me, but she wouldn't.  Something to do with for better or worse, sickness and health, slow or fast, I guess.

The highlight of the race was seeing "Team Hoyt."  You might have heard of this father and son team.  If you have not, please check out their website at http://www.teamhoyt.com/.

All in all, it was a nice race.  An added benefit was finishing close to Tampa General Hospital, where I had patients to see after the race.  Now that was multi-tasking!
Posted by Scott Swanson, M.D. at 5:44 AM No comments: Links to this post

Can wearing compression socks help you squeeze out a better performance?

Swelling is an inevitable by-product of foot and ankle injuries and surgeries.  Although it is totally normal, the swelling is uncomfortable and patients don't like it.   I regularly prescribe compression stockings to help control this swelling.

I have watched with interest as more and more runners wear compression socks during their runs.  Specialty running stores are beginning to carry them, too.

This begs the question, what is the benefit, if any, to runners?

Although I have not run with compression socks on, I do wear them occasionally, and my legs will typically feel "fresher" afterwards.  I have worn them the day or two after a tough marathon for the same reason.

There are a handful of studies looking at the physiological effects of wearing compression stockings during exercise.  Most studies show no measurable improvement in running performance.  However, there does seem to be a trend towards increased tissue oxygen saturation and decreased soreness after a workout.

Although wearing compression stockings is unlikely to improve performance, they can perhaps hasten recovery and prevent soreness afterwards.
Posted by Scott Swanson, M.D. at 5:51 AM No comments: Links to this post

Nothing little about the Little Rock Marathon medal

The Little Rock Marathon is famous for having the largest finisher's medals around.  I was expecting a big medal, but was surprised at just how big it was. 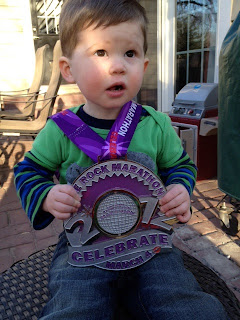 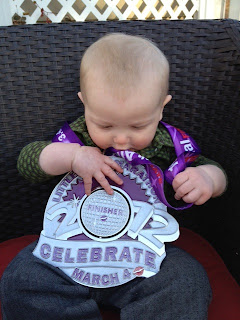 Posted by Scott Swanson, M.D. at 6:09 PM No comments: Links to this post

Getting closer! You are next, Utah! 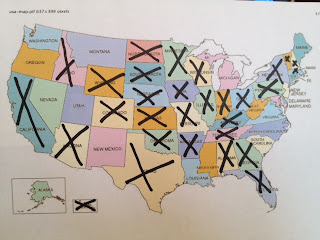 Posted by Scott Swanson, M.D. at 2:23 PM No comments: Links to this post

Stress fractures are among the most common conditions I see and treat in my practice.  The condition can often be related to improper training or overuse.  Nutritional deficiencies, however, can cause weakened bones and contribute to stress fractures, even in younger patients.

Calcium and Vitamin D are necessary for strong bones.  We all have heard about how important calcium is, but attention is now focusing on the important role of Vitamin D.  Your skin uses sunlight to help your body body produce an active form of Vitamin D.  Living in northern climates with fewer hours and annual days of sunshine, Vitamin D deficiency is very common.

A recent study suggests that increased Vitamin D intake, in the form of diet or supplementation, may help lower the risk of stress fracture in some patients.

http://www.nlm.nih.gov/medlineplus/news/fullstory_122605.html
Posted by Scott Swanson, M.D. at 9:30 PM No comments: Links to this post

This one was another adventure.  I had signed up to do this early spring race each of the last two years, but could not make it either time.  This was going to be the year!

My flight out of Omaha was delayed and I was re-booked onto another flight.  I was still scheduled to get into Little Rock at 1:30PM, well before the expo and packet pick-up closed at 6.  When I got to Atlanta I discovered that my flight to Little Rock was delayed until 4PM!  There was an hour time difference, so I was still scheduled to get in at 4:30.  No problem, I thought.  We boarded the flight and were promptly told that there was a maintenance issue that would take 45 minutes to fix.  I began to fidget a bit.  The marathon instruction book clearly stated that there would be no late packet pickup, NO EXCEPTIONS.

The flight finally leaves and we land in Little Rock at 5:22PM.  The expo would close in 38 minutes, but the airport was close, so I still should be able to make it.  Unfortunately, there were no taxis anywhere.  I ran up and down the airport frantically looking for a cab.  I called every company I could find in my iPhone.  A cab finally showed up at 5:55.  I told him to hurry.  I arrived at the expo 10 minutes late, was told that they had just made an announcement that packet pick up was closed.  I ran to packet pick up and pleaded my case.  A very nice volunteer grabbed my packet out of the box and handed it to me.  I had barely made it.

After the stress of that, the race was easy.  There was a nice pre-race pasta party at the host hotel.  The race started at 8 AM with temperatures in the low 40s.  It was sunny and breezy.  Temperatures quickly climbed into the 50s, and were in the mid 60's at the end of the race.  Pretty good conditions.

The course was nice, mixing in downtown with some of the historic neighborhoods and parks.  I think it would be better to visit Little Rock a little later in the spring, but it probably gets too hot then.  After the half-marathon runners split of at mile 13, the course had a series of fairly steep climbs until mile 16.  The course flattened out with two more climbs set to greet runners at mile 24.

I finished just over 4:37, which has been a pretty steady trend for a while now.  I felt great and didn't have any of the IT band issues that have plagued my last two races.  There was plenty of recovery food and fuel at the finisher's area along the Arkansas River.  There was a post-race party later that night with local BBQ and music.

This was the 10th running of the Little Rock Marathon.  The locals are very proud of the race and have good reason to be.  The theme changes each year with this year being Disco.  Little Rock is famous for the finisher's medal.  It is literally as big as your head!  I'll post a picture later.

I can definitely recommend running Little Rock, but I would recommend getting there a little earlier next time!!

Posted by Scott Swanson, M.D. at 6:01 AM No comments: Links to this post