2012 was my most ambitious year.  I finished eight marathons, including my first "double" running back to back marathons on Saturday/Sunday.  It would have been nine if the NYC Marathon hadn't been cancelled by hurricane Sandy.

Fastest Marathon--I use this term pretty loosely, but my fastest marathon was the Bayshore Marathon in Traverse City, Michigan that I completed in 4:21:05.

Best Family Trip--This title also goes to Bayshore.  It was a Memorial Day weekend trip, and we stayed at the Great Wolf Lodge.  Awesome place to stay with kids.

Best Aid Station--They guy at the Salt Lake City Marathon who set up a soft-serve ice cream station.  On a hot day when I wasn't feeling great, this was a nice pick-me-up.

Most Over-Rated--Phoenix Rock and Roll Marathon.  The RNR series races just don't do it for me.

Coolest Thing--Seeing thousands of runners descend on Central Park on race day to run a marathon anyway, most honoring charity commitments and thousands more helping those devastated by the storm.

Most Fun--The Lululemon 1/2 Marathon in Vancouver that I ran with my wife and a bunch of friends from Lincoln.

Biggest Surprise--Returning from the 1/2 Marathon in Vancouver and finding out that we will be having a baby girl in 2013!!

The Most Wonderful Time of the Year

It's not the presents, the candy, or the mistletoe that make this time of year exciting for me.  It's the 2013 marathon calendar and planning the next year of races.

I plan on running 8 marathons again next year.

Registration for the Lincoln Marathon opened this week and sold out in record time.  Congratulations to the runners who made it in.  Now you have to train!  See you in May!
Posted by Scott Swanson, M.D. at 5:40 AM No comments: Links to this post

This race is a pretty well kept secret nationally.  Birmingham is one of the great southern cities, and this marathon has got to be one of the best in the south.  I flew in by myself on Saturday morning.  Packet pick up was a breeze and there was a nice, small expo.  Downtown Birmingham is pretty dead during the weekend, and that was the only drawback to the event.  It was hard to find a place to eat lunch.  The evening made up for it.  The pre-race pasta dinner was the best I have seen.  The dinner was at the Alabama Sports Hall of Fame, a very cool place to visit.  I especially enjoyed the area dedicated to Dr. James Andrews, one of the legends in Orthopaedic Surgery and Sports Medicine.  The proceeds from the dinner benefited The Bell Center for Early Intervention, a charity for kids with special needs.  A lot of the kids and parents were on hand to serve the dinner and mingle with runners.  Very cool.

Race day was cool and dry.  The course was pretty unremarkable.  I remember running by tons of churches.  If the race organizers could collaborate with the churches and get some of the gospel choirs to perform on the course, I think they would really have something.

I finished in a familiar time of 4:45.  The post-race party was also a highlight.  Kegs of beer and BBQ with a live, southern rock cover band.  Teen-age girls dressed in southern antebellum dresses and hats handed out desserts.  It was a very nice way to cap the weekend.  I caught a late flight home, and if it wasn't for being stuck in O'Hare for 5 or 6 hours on my connecting flight, it would have been almost a perfect weekend.

Posted by Scott Swanson, M.D. at 2:54 PM No comments: Links to this post

We have had a very mild late fall so far, but with weekend wind chill in the single digits in Lincoln, I found myself dreaming of a warmer place.  If you are going to dream about an escape from the numbing cold, Maui is as good as it gets.

My wife and I were married in Maui in 2004 and we had wanted to get back.  There are few options for winter marathons, so this seemed like a perfect time to go back.  I was not in great shape for this race and my training had been hampered by the cold and snow we were having in Lincoln.

Packet pick up was very small and there was no expo or anything. The race started at 5:30 AM in Wailea with a traditional Hawaiian prayer and dance.  The race was run on the side of a road, sometimes with oncoming traffic.  There were spectacular views of the volcano Haleakala and the ocean (January is prime whale watching season in Hawaii).  It was hot and hilly, but when you are basically running on a volcano, you can't expect any different.

I walked quite a bit during this marathon and even took a shot of rum at mile 19.  The race ends in Old Lahaina, probably my favorite part of the island.  I immediately headed out into the ocean and soaked in the cold, salty Pacific Ocean.

The course was hard and I was out of shape and jet lagged, but I finished.  I spent the next several days recovering and enjoying this island paradise.  I wish there were more states like Hawaii on my path to 50. 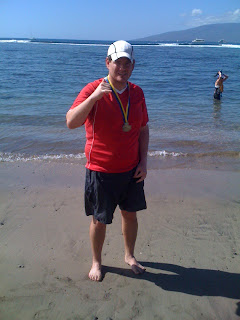 Posted by Scott Swanson, M.D. at 6:33 AM No comments: Links to this post